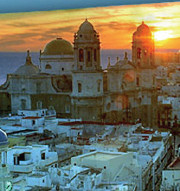 The fifth Biennial Congress of the Association for European Cardiovascular Pathology (AECVP) will take place in Cadiz, Spain, in 2012, 4-6th October.

On behalf of our Association and the local organizers, led by Prof. Joaquin Lucena, I welcome you to Cadiz to attend a meeting devoted to cardiovascular pathology. This meeting will happen in both historical and historic contexts.

The antecedents of the University of Cadiz were established in 1745 by Pedro Virgili with the Royal College of Army Surgery, the first institution in Europe to concede the degree in both, medicine and surgery. But 2012 will be a very special date for Spain: the commemoration of the bicentennial of the Spanish Constitution, La Pepa, also named the "Constitution of Cadiz" promulgated during the war of independence against the Napoleon's army and presented as a symbol against absolutism in the Europe of the early 19th century.

This fifth Biennial Meeting of the AECVP will be the opportunity to update our knowledge in cardiovascular pathology and medicine for almost three days looking at the most modern aspects of our discipline: sudden death in sports, molecular pathology and genetics, cardiovascular imaging correlation with pathology. This will be also the time to hear about tropical cardiovascular diseases, congenital heart diseases, and many other diagnostic topics in several symposia, keynote lectures, free communications, case reports, and posters.

Furthermore, we will enjoy a superb social program inspired by the spirit of La Pepa. Sure that Cadiz meeting will be attractive!