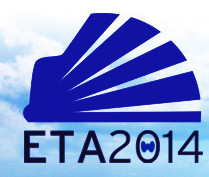 We are looking forward to organizing the annual meeting of 2014. Galicia, a region in the North West of Spain, has a well known relationship with thyroid disease since iodine deficiency and endemic goiter were historically present in broad areas. In the other hand, the Hospital (Hostal) of the Catholic King and Queen, fully operative from 1511 to attend the medical needs of the multitude of pilgrims arriving to Santiago, succeeded in generating broad medical knowledge and clinical practice of extreme quality since medieval times. This tradition has continued to our days and we have a worldwide known group of basic and clinical endocrinologists.

Santiago de Compostela is in Galicia, the western region in Spain at the South of Europe. The western cape in the continent was called by the Romans: Finisterre, “the end of the Earth”. Taking a bit of free time and with luck on the weather, Galicia has the most beautiful beaches in Spain, where the Atlantic reaches the land. The beaches are protected from the wild sea because of its location in the Rias. Sea food, fish and white wine are considered the best in Spain. But we also have excellent meats and famous chorizos.

All this history, medicine and academic knowledge together with its beautiful countryside and seaside will be waiting for you in  ETA2014.  The Spanish Endocrine Society of Endocrinology (SEEN) fully support the congress and many of its members actively want to participate. We hope that the congress will be a success in this southwestern European town.